Dakota State University plans to back up its branding as the “cyber powerhouse of the Plains” with $90 million dollars to expand regional cybersecurity research.

With the public and private sectors raising the alarm on a lack of cybersecurity talent to meet rising threats, Dakota State announced a slew of projects last week. These include a planned $50 million lab in Sioux Falls, designed to offer the state as an alternative to the costs for workers who want specific, skill-intensive research jobs. Dakota State laid a foundation for the initiative with tens of millions of dollars spent on academic and specialized research buildings in Madison, a small city in southeast South Dakota.

“[The $90 million plan] is huge, particularly for a small institution in the middle of the country,” President Jose-Marie Griffiths told EdScoop. “It may not be huge for an MIT or Stanford or somewhere like that, but for us, it’s huge. And I think it will go a long way to say the interest is here, the support is here — the support of our local community in Madison, the support of the Sioux Falls community, and the statewide community generally as well.”

Dakota State is now looking to add more researchers at its labs in Madison, population 6,000. Dakota State, which Griffiths once called “the little university on the prairie,” is also planning to build a facility in the much larger Sioux Falls, population 192,000, and also add more faculty and students at its Beacom College of Computer and Cyber Sciences. Griffiths said though Dakota State is well-known in certain pockets of the cybersecurity community, the next step is marketing what the area has to offer when recruiting — a low cost of living and doing business, but also with the opportunities and history at the DSU applied research labs.

“[It’s] a hard one and if you think about it, why would people come from various parts of the United States to Madison, South Dakota, that probably people have never heard of?” Griffiths said. “We think [our people and facilities] plus the connections and expertise will attract some people to come here because they will as faculty members be able to conduct this research, they’ll be able to work with corporations and agencies that they otherwise might not have if they’re in a university somewhere else.”

Cyber operations — a field Dakota State professors have taught for two decades — involves performing offensive and defensive tasks, like finding potential exploits and tracking bad actors. The National Security Agency designed Dakota State a Cyber Education Center of Excellence in 2012 and worked with the university on cybersecurity education initiatives. Now, about half of the university’s enrollment is in cybersecurity programs, Griffiths said, and DSU advertises a 99% job placement rate for last year’s graduating class.

Dakota State opened its Beacom Institute of Technology building in 2017, a $11.4 million facility that was the first new building on campus in 30 years, according to the university’s website. The same year, a $30 million donation kickstarted the Madison applied research labs, designed to complete problem-focused research brought to researchers from external agencies and organizations. After two further years of development, the facility opened in 2019.

External interest was “almost instantaneous,” Griffiths said, and the university opened a second facility last year to house more researchers. The success of the labs in attracting workers and research interest was the evidence needed to advocate for the massive expansion of existing programs and facilities detailed in the $90 million initiative, Griffiths said. Though the university’s leadership isn’t shy about talking to people and organizations about the cybersecurity efforts going on at Dakota State, she said, it’s time for a bolder display.

“We felt if there’s this level of interest and we really haven’t started marketing yet, and we haven’t gone out to really do a dog-and-pony show that we have these capabilities, experts and facilities, we felt that we could develop the plan itself,” Griffiths said. “And in fact, once we floated the concept, the need and the vision, we were asked specifically to develop the plan, which is what led to what we announced last week.”

‘On our back doorstep’

As well as attracting more faculty with research opportunities, Griffiths said a major component of expanding the labs is retaining Dakota State’s graduates. Cyber operations degrees often lead students to jobs on the coasts at federal or military facilities, she said.

“We know by talking to our graduates that have gone elsewhere that many of them — I would say now eight or nine out of 10 — want to come back to this part of the world, it’s home,” Griffiths said. “There’s quality of life that they are comfortable with. They like the space, the recreational areas, etc., and they just can’t come home. They would either have to do something else or stay where they are. Now we’ve given them the opportunity, so in a way we’re graduating students, and we’re creating the job opportunities for them right here on our back doorstep.”

“If we do this, and we build this pool of expertise around the faculty that we hire around, the graduates that we produce it and it’s high-end work, then it’s going to attract others to come and be close-by, co-located around us,” Griffiths said. “Similarly, I do believe that we’ll see a certain amount of entrepreneurial activity and spun-out product as well.” 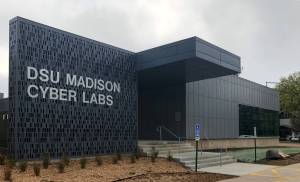 How the ‘little university on the prairie’ became a ‘cyber powerhouse’