Miami Dade College on Tuesday opened an Artificial Intelligence Center that university and community leaders hope will position the region for the future of technology.

Motivated by a U.S. Bureau of Labor Statistics projection of more than 500,000 new AI jobs by 2029, the college and its foundation invested $6.5 million to construct the facility. The 13,000 square-foot center, housed on the second floor of a campus building, is the first of two planned facilities to support the region’s AI education and workforce efforts. (The second will be located in downtown Miami.)

College leaders said Tuesday that the center will provide a resource for community members to join Miami’s bustling tech sector.

“This is an area that needs that spark, opportunity and integration of the jobs that are coming,” said Antonio Delgado, the college’s vice president of innovation and technology partnerships, the Miami Herald reported.

According to the center’s website, visitors are greeted by a holographic concierge powered by IBM Watson. The center has a room for design thinking and robotics, and it will host local technology leaders to speak about issues related to AI, including ethics, supply chain issues, the workforce and data analytics.

The center is supporting events, like an upcoming AI Bootcamp, sponsored by the Mark Cuban Foundation, in October and November, designed to expose high schoolers to AI and machine learning. The center also supports new AI courses and degrees the college is offering, including an “AI thinking” course and associate’s and bachelor’s degrees in AI.

The Herald reported that the ribbon cutting included demonstrations, such as a conversation between a human presenter and a hologram named Sky, as well as a showcase of the college’s use of virtual reality headsets to support classroom instruction, a technology that’s being adopted by several other institutions.

The investment piggybacks on MDC TECH, a workforce initiative at Miami Dade College that received a total of $16 million from the Knight Foundation, Miami-Dade County and the City of Miami to create the new AI courses, along with scholarships, professional development programs and faculty training sessions. 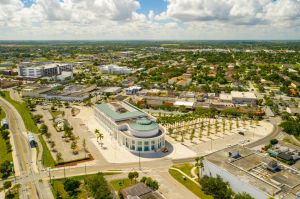