After discontinuing its use of Russian-made food delivery robots earlier this year, Grubhub announced on Monday a new partnership with the robotics company Cartken, along with plans to deploy the robots to the Ohio State University campus this fall.

Much like the robots they’re replacing, the Cartken bots coming to OSU are six-wheeled cooler-shaped vehicles that use cameras to navigate their surroundings and deliver food to hungry students and faculty. Grubhub announced in March it would stop using bots sold by Yandex, the internet search company headquartered in Moscow, in light of Russia’s invasion of Ukraine.

“Robot delivery has been very popular on campus this past school year, validating our prediction that students would appreciate autonomous mobile delivery,” Ahmed said.

Grubhub says it offers service on more than 250 U.S. college campuses, which are “notoriously difficult for cars to navigate.” AI-powered robots, conversely, can use sidewalks, and withstand harsh weather and navigate obstacles, relying on human intervention when they get stuck. According to Grubhub, the new bots will travel at a top speed of 3 miles per hour.

Grubhub said the upcoming launch follows a testing phase of the Cartken bots that was held on OSU’s campus this spring.

Cartken was founded in 2019 by former Google engineers who developed a short-lived project called Bookbot while at the search giant. Today they compete in an increasingly lucrative market — Starship Technologies, another robotics company, claimed its global food deliveries tripled in 2021 as people around the world hunkered down for the pandemic. 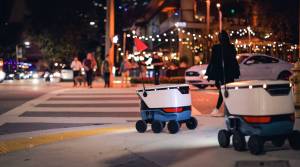