The Massachusetts Institute of Technology is leading a group researching energy efficiency in artificial intelligence, anticipating a moment when advanced systems could suck up power at an unsustainable rate.

“This program is about accelerating the development of new hardware to implement AI algorithms so we can do justice to the capabilities that computer scientists are developing,” del Alamo said.

Data centers and machines that run AI require significant amounts of energy. Data centers consume about 2% of total U.S. electricity use and require 10 to 50 times the amount of energy of running a typical commercial building, according to the Department of Energy.

Alamo used an example of self-driving electric cars, where AI technology that directs the car to turn or stop uses up a chunk of the battery. Researching how to develop AI hardware to save energy requires looking at each stage of producing a product, del Alamo said, which is why it’s critical for MIT researchers to partner with industry.

“To make really substantial scholarly breakthrough innovations in hardware, you really have to do research across what we call the vertical abstraction stack, or the vertical intellectual stack,” he said. “In other words, you start at the bottom, you have materials, devices, circuits, eventually you get into chips, architecture, and then algorithms, software, and then complete systems.”

Part of the project is building a community between the companies that make all these components so that they share a common knowledge of the problem and work together on research, del Alamo said.

ASML Vice President Tony Yen, head of the company’s technology development center, said it wants to figure out ways to pattern improved devices and circuits onto silicon in the densest way possible, creating smaller and more energy-efficient chips. If the partnership’s research changes how these components are made, it could mean a different structure would be more efficient, he said.

“Without any R&D, [these chips would] be much harder to print, but if this contributes to more energy-efficient computing, we need to figure out a way to print them,” Yen said. 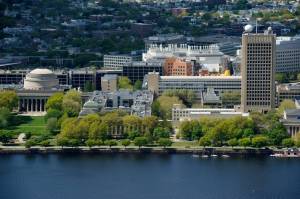