A former finance director at New York University was charged with fraud this week after allegedly stealing $3.5 million in grant funds from school programs meant to assist minority and women-owned businesses. The six-year scheme seems to have only been caught after the university implemented a new electronic payment system.

On Monday, the Manhattan District Attorney’s Office announced 57-year-old Cindy Tappe of Westport, Connecticut, NYU’s former director of finance and administration at the university’s Metropolitan Center for Research on Equity and Transformation of Schools — or Metro Center — had been indicted on one count of money laundering, one count of grand larceny and two counts each of offering a false instrument for filing and falsifying business records.

NYU spokesperson John Beckman said the school was first alerted to the activity after it implemented a new electronic payment system.

“Our Internal Audit unit developed concerning findings, which NYU immediately furnished to the State Department of Education and the State Controller’s office,” Beckman said in a statement. “Since alerting the authorities, the University has been fully cooperating with the various agencies involved.”

Beckman said Tappe left NYU shortly after the audit’s findings in 2018. He did not respond to requests for more information on the payment system that was implemented the same year.

The New York Post reported Tuesday that Tappe has been put on leave from her role as an operations manager at the Yale School of Medicine.

According to a news release from Manhattan District Attorney Alvin Bragg, the New York State Education Department awarded NYU $23 million, between 2011 and 2018, for the Metro Center to administer two state programs: the Regional Bilingual Education Resource Network, which helps school districts improve results for English language learners, and the Technical Assistance Center on Disproportionality, which addresses inequalities in special education. Both programs were subject to state requirements that a certain percentage of project subcontractors be minority or women-owned businesses.

As the Metro Center’s finance director between February of 2012 and December 2018, Tappe arranged for three certified minority and women-owned subcontractors to receive the overwhelming majority of the payments, but none of the companies completed work, according to prosecutors. Instead, it said, they functioned as pass-throughs, taking between 3% and 6% of the invoice amounts as “overhead” and sending the remainder of $3.352 million to two shell companies Tappe created. The district attorney’s office said the companies submitted fictitious invoices that were allegedly drafted by Tappe.

She allegedly routed $3.3 million to bank accounts held by shell companies and took more than $660,000 to pay for personal expenses — including renovations to her home in Connecticut, like an $80,000 swimming pool, the news release said.

After the university implemented a new electronic payment system in 2018, another NYU director confronted Tappe about the payments being made to the subcontractors, the news release continued. In response, Tappe emailed the head of New York State’s two grant programs and stated that NYU had “developed good working relationships with these companies” and that she had “found no other companies that offer the same suite of services for price,” the news release said.

Tappe pleaded not guilty on Monday to all charges, according to a report from Gothamist. EdScoop did not receive a response from Deborah Colson, Tappe’s attorney, in time for publication. 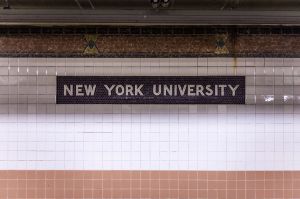