Psychologists at Florida International University announced this week they’ve developed a website that helps people remember who they’ve recently been in contact with.

Called CogTracer, the tool uses investigative interviewing techniques to help people who may have been infected with COVID-19 to more accurately list people they have been in contact with, said Deborah Goldfarb, an FIU psychologist who helped create CogTracer. Goldfarb told EdScoop the tool can help health authorities alert people who were potentially exposed and advise them to get testing or self-isolate to help slow the spread of the virus, which has seen recent upticks at universities around the country that resumed in-person classes this fall.

Rather than asking users to simply recall who they may have come in contact with, Goldfarb said, the web-based tool uses audio prompts that aid recall. CogTracer asks users to visualize themselves in the places they went during the time they may have been contagious and to think about what they were thinking, hearing, seeing and feeling in those places.

CogTracer does not perform the actual contact tracing function, nor does it store data from its users, Goldfarb said. Rather, the tool simply helps users create more accurate lists of close contacts that can be shared with health officials leading contact tracing efforts, she said.

“Because we know that every single contact that people don’t recall during the interview is somebody that continues to go out into public and potentially spread the disease,” Goldfarb said.

Users can create their lists in a Word document, on their phone, in an audio message to themselves or on a physical note pad.

“This is just a free tool we developed to help people,” she said.

Currently, the tool is only available in English, but researchers are developing Spanish and Portuguese versions as well, according to the website.

The interview style used by CogTracer is typically used by the justice system to conduct forensic interviews with witnesses to collect more accurate statements, Goldfarb said.

“[Contact tracing] is the main way we have right now to know who an infected person may have gone on to infect,” she said. “And so if we can keep all those people isolated, then we decrease the chance that the disease continues to spread.” 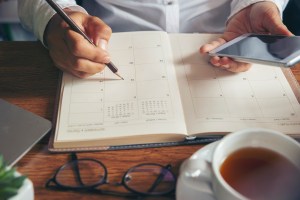