A record-breaking number of educators converged in Chicago this week to attend the ISTE annual conference, and already, the association has signaled its plans to shift and expand the conference experience that has come to be known as the “epicenter of edtech.”

For starters, ISTE wants teachers and edtech proponents to know there’s more to ISTE than its big conference. One way it plans to do this is through ISTE U , an online learning hub for educators that seeks to build on the rich professional development opportunities available at the conference and make them available year-round.

Another way is by offering specialized, standalone events over the next year, starting with three new ones announced this week and a fourth coming soon.

“We feel like, as awesome as our conference is here, sometimes there are focused conversations that are hard to have when there’s so much else going on,” said Richard Culatta, CEO of ISTE, during an event with reporters Monday morning. “So we felt it was important that we called these out.” 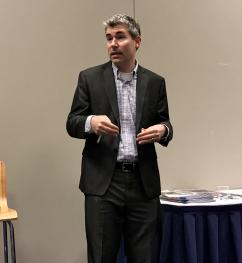 Richard Culatta, CEO of ISTE, at the 2018 annual conference. (EdScoop)

This fall, ISTE will host its first No Fear Coding Lab to demystify computer science and encourage teachers to embrace the discipline in their classrooms. The event will be held Oct. 6-8 in Detroit, intentionally scheduled to lead up to the annual CSforAll Summit held that week in the same city.

The following month, from Nov. 10-11, ISTE will host the Creative Constructor Lab in Seattle. Experts will advise educators on how they can leverage technology to promote creativity, problem solving, communication, collaboration and other soft skills with students. And early next year, from Jan. 18-20 in Santa Clara, California, ISTE will host the Digital Leadership Summit , specifically geared toward district-level technology leaders.

In total, more than 24,000 people gathered in the Windy City for the 2018 show, making it “the largest-attended ISTE conference ever — by a significant amount,” Culatta said. “We’ve broken about every possible record this year.”

He added that the association received more than 5,000 session submissions — and accepted about 1,700 of them — and is hosting educators from 87 different countries, including several ministers of education and the former president of the Dominican Republic.

Days before the conference, ISTE announced the EdTech Advisor , which aims to improve the disjointed process of reviewing and rating edtech tools on the market.

“We are making decisions about what tools to use in class with very, very little data,” Culatta told members of the press, “and I think that decision is too important to be left to chance.” ISTE Chief Learning Officer Joseph South added that, on average, each school district is running 582 different applications, despite minimal research and inconsistent evaluations.

With the EdTech Advisor, ISTE is “actually trying to take into consideration context and … trying to build a much better set of data” about what educators like, use and find valuable, Culatta said.

Garnering mixed reactions at this year’s conference is the presence of “ smart badges ,” which use location data to record the rooms and sessions ISTE attendees visit.

For ISTE officials, the badges offer easily accessible data about things like which sessions are popular, which rooms are too far away to get much traffic and which need extra chairs for an overflow audience. For attendees, the badges will help create a customized report — the “ISTE 2018 Journey” — immediately after the conference, which will include digital resources and presentations from each session attended.

“It’s like taking notes with your feet,” the ISTE website says. “Additionally, this data will allow the ISTE team to further personalize the conference experience now and in the future.”

Only the aggregate data will be shared publicly, Culatta said. No personally identifiable information will be shared, and individual attendees are the only ones who will have access to their unique data. All attendees have the choice to opt out and use a standard event badge.

by Emily Bamforth • 17 hours ago
The essential higher ed and K-12 information technology news, delivered straight to your inbox.
SIGN UP FOR OUR WEEKLY NEWSLETTER.
Privacy Policy
We use cookies to provide you with the best experience across all Scoop News Group websites. By using Scoop News Group websites, you consent to the use of cookies. Learn more