The biggest edtech conference of the year took place in Chicago this week, and many companies and organizations used it as a platform to announce their own news.

Google for Education announced 12 new tools and features ahead of the new school year, Microsoft Education launched a grant program called the Limitless Libraries Fund, IBM partnered with Edmodo and Scholastic to build custom curricula with AI, and ISTE unveiled plans to expand and specialize its event series.

But behind the heavy hitters, many other groups made waves in the education sector, too.

Future Ready Schools, a coalition of numerous organizations led by the Alliance for Excellent Education (All4Ed), announced a new initiative, Future Ready Technology Leaders , to empower school and district tech leaders to better connect their policies, practices and procedures to educational innovation in their schools.

“Far from just counting boxes and wires, school and district technology leaders play a huge role in supporting schools in their transition to digital learning,” Bob Wise, president of All4Ed and former governor of West Virginia, said in a statement. “From creating open, flexible and robust digital environments that support teachers to creating anywhere, anytime learning for students, technology leaders hold the key to unleashing the power of digital learning for students and teachers alike.” 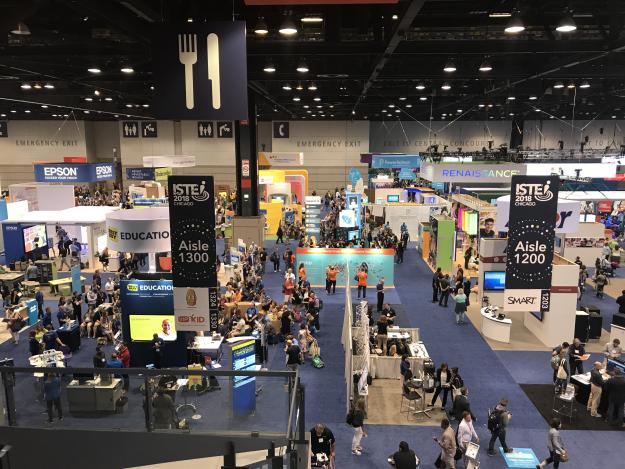 The exhibit hall at the ISTE 2018 conference in Chicago’s McCormick Place. (EdScoop)

This fall, there will be five FRS institutes , free two-day professional learning events to give FRS Tech Leaders the opportunity to collaborate on building regional networks of like-minded colleagues, generate feedback on practices and identify resources for taking personalized learning strategies to the next level.

Also during ISTE, Funds For Learning announced the release of its annual E-Rate Trends Report, in advance of the Federal Communications Commission’s (FCC) evaluation of funding regulations governing broadband internet in schools and libraries.

The top-level finding of the report: Schools and libraries continue to rely on E-rate funding to provide and maintain connectivity.

“The responses we received show us just how important it is for the E-rate program to continue fulfilling its mission,” John Harrington, CEO of Funds For Learning, said in a statement. “Rising demand for Wi-Fi access indicates that applicants will increasingly depend on reliable connections to provide high quality education in coming years.”

Other key findings in the report:

The nonprofit Common Sense Media announced it has overhauled its popular K-12 digital citizenship curricula, beginning with the curriculum for grades 3-5, which will be released in August.

As outlined in an article in Education Week, among the changes are an expanded focus on media literacy and helping students learn how to think about difficult “digital dilemmas,” such as considering the impact a social media post might have not just on the student and his or her circle of friends, family and acquaintance, but on strangers who might see it and be influenced by it.

The revamped digital citizenship curriculum was created in partnership with researchers at Project Zero , which is housed within the Harvard Graduate School of Education.

One of the most exciting changes, according to Kelly Mendoza, senior director of education programs at Commons Sense, is the new integration with Google tools. It’s a feature many teachers had requested in recent years, Mendoza told EdScoop, and one she expects will be well-received.

University of Michigan plans new school of technology and innovation

by Betsy Foresman • 4 days ago
The essential higher ed and K-12 information technology news, delivered straight to your inbox.
SIGN UP FOR OUR WEEKLY NEWSLETTER.
Privacy Policy
We use cookies to provide you with the best experience across all Scoop News Group websites. By using Scoop News Group websites, you consent to the use of cookies. Learn more