By traditional metrics, Georgia State University is far from elite. A large urban university in Atlanta with more than 50,000 students, the university is one of the largest minority-serving institutions in the country, with 75% of students being non-white and 60% Pell-eligible. Our student-to-faculty ratios are well above national averages and our tuition costs are well below them. How, then, have we raised graduation rates by more than 60% over the past decade? How is it that our Black, Hispanic and Pell-eligible students now graduate at or above the rate of the student body overall — and have done so for six years running?

The simple answer is that we have worked at Georgia State to address the design problem that plagues American higher education. Without restricting admissions or raising our tuition to the rates of elite institutions, we have leveraged data and new technologies to deliver unprecedented levels of personalized attention to our students. As recently as five years ago, we were losing almost 20% of our confirmed freshman class each fall to a phenomenon known as summer melt. Students were not making it to the first day of college classes because they were getting tripped up by bureaucracy. Some were failing to complete their federal aid applications, while others were not submitting verification documents, proof of vaccinations, transcripts or placement scores. Most of the students who struggled with these issues were from low-income backgrounds.

This situation was heartbreaking. Almost all of the obstacles these students faced could be overcome, some easily — if only the students had personalized help. Such help was difficult to provide, though, since the students were not yet on campus and did not tend to respond to our emails and phone calls.

In the summer of 2016, Georgia State became one of the first schools in the country to deploy an AI-enhanced chatbot to address summer melt. We built a knowledge base with thousands of answers to questions commonly asked by incoming students, and we worked with AdmitHub to place the answers on a texting platform so that students could ask questions 24/7 from their phones. If the answer was in the knowledge base, the platform would deliver the answer to students via text on the spot. If the answer was not in the knowledge base, the platform would deliver the question to staff to write an answer and add it, so the bot was constantly getting smarter.

In the first three months of use, the chatbot had more than 180,000 exchanges with our incoming students, with an average response time to a student inquiry of six seconds. With usage heavier at 1:00 a.m. than 9:00 a.m. — an indictment of our standard business practices at Georgia State — dozens of students began to resolve bureaucratic challenges that in the past had stopped their progression. With the help of the chatbot, we have lowered summer melt by 37%. That means 350 additional students are enrolling at Georgia State every year, with the biggest gains in the low-income student population.

The chatbot has worked so well for our incoming students that we have expanded its use to our entire student body. Our randomized control trials showed that when it comes to completing key enrollment tasks, such as removing holds from their accounts, paying off balances and seeing advisers, students on the chatbot are performing at levels 20-40% better than others.

Our use of a chatbot is just one example of our efforts to deliver systematic, personalized support to students. In advising, we are using data to track every student, every day for more than 800 academic risk factors, and reaching out proactively — more than 100,000 times in the past 12 months — to get them the help they need. Thousands of additional students are staying on track and graduating, and we have lowered the average time it takes to earn a degree by a full semester, saving students millions of dollars in tuition and fees.

Georgia State seniors who are running out of eligibility for financial aid and grants benefit from an analytics-driven micro-grant program. If they are academically on-track to graduate but face financial holds or unpaid balances, we are proactively awarding them Panther Retention Grants — no application required — up to $2,000. We’ve awarded more than 20,000 such grants since 2011. Students who in the past were dropping out for financial reasons close to the finish line are now graduating at rates well above 80%. Third-party evaluations have shown that the program more than pays for itself. It turns out that holding onto students is not only the right thing to do — it’s also good business.

The lessons learned by Georgia State are transferable. We have just opened the National Institute for Student Success to disseminate our practices to other colleges and universities, and the federal government has proposed national funding for the scaling of evidence-based programs that help college students succeed. While American higher education was not designed to produce equitable outcomes, we now have the power to redesign our campuses to provide timely, individualized support to all students. As Georgia State University has shown over the past decade, the results can be transformative.

Timothy Renick is the executive director of the National Institute for Student Success and a professor at Georgia State University, where he has led the university’s student success efforts since 2008. 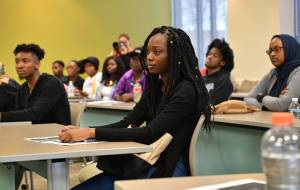