The U.S. Education Department continued its run of wiping out debts incurred by former students of for-profit and largely online colleges on Tuesday, announcing the forgiveness of $1.5 billion in loans taken out by people who attended Westwood College, which closed in 2015.

Westwood, which at its peak operated 15 physical campuses and a large online degree program was found to have “engaged in widespread misrepresentations” about its academic reputation and its students’ job prospects, a department press release read. The loan forgiveness will benefit about 79,000 people who enrolled in Westwood’s programs over the years.

The Education Department said it collaborated on its investigation into Westwood with the attorneys general of Illinois and Colorado. In Illinois, Westwood was found to have promised students in its criminal-justice programs future jobs with the Chicago Police Department and Illinois State Police. But, officials said, Westwood never obtained the accreditation necessary to qualify its graduates for jobs with those law-enforcement departments. “As a result, it was impossible for Westwood students to achieve those employment goals,” the press release reads.

Westwood was one of many for-profit schools that got its credentials from Accrediting Council for Independent Colleges and Schools, which the Education Department stripped of its federal recognition last month. Ongoing questions about Westwood’s practices also led to the June 3 resignation of University of Phoenix President George Burnett, who had previously been CEO of Westwood’s parent company.

The Westwood action is the latest step the Education Department’s taken to discharge the debts incurred by former students of for-profit, primarily online — and often defunct — colleges. Last month, it wiped out $3.9 billion in loans taken out by students if ITT Technical Institute, which closed in 2016, and in June, it canceled nearly $6 billion in debt for students defrauded by Corinthian Colleges. 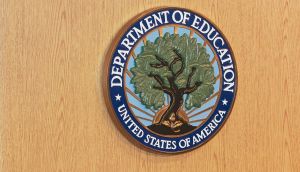 Education Department forgives $1.5B in debt for students of defunct Westwood College