Leaders in the edtech community praised the introduction of the Digital Equity Act of 2019 to the Senate on Thursday, which aims to connect more communities across the country to high-speed internet.

Sponsored by Sen. Patty Murray of Washington state, the bill would create two new grant programs to sponsor state and local initiatives, with $125 million allocated to each. Students, families and workers would benefit from the act, according to a statement from Murray’s office, through increased access to modern communications and technologies that allow meaningful participation in today’s digital age.

“This new digital equity bill constitutes a major step forward toward closing the Homework Gap and providing equitable digital access to students nationwide — regardless of where they live or their family’s income,” Keith Krueger, the chief executive of CoSN, an edtech advocacy group, said in a statement.

The State Educational Technology Directors Association, a membership association for educators, also praised the new legislation. “It’s time to close the digital divide,” the organization tweeted. So far, more than 30 organizations have endorsed the bill.

The internet and the technology it supports has become critical to the success of students, families and workers.

According to the Pew Research Center, nearly one in five teenagers in the U.S. say they have been unable to complete homework assignments due to lack of a reliable internet connection, and communities of color, people with disabilities, low-income households, and rural communities are overwhelmingly impacted by the digital skills gap.

Without meaningful action, these groups are at risk of being left behind in an increasingly technology-driven world, Murray’s office says, and so this act funds a path to where millions more Americans can benefit from broadband access.

“I believe the future belongs to the connected,” Federal Communications Commissioner Jessica Rosenworcel said in a statement. “No matter who you are or where you live in this country, you need access to modern communications to have a fair shot at 21st-century success.” 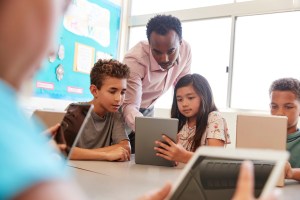