The $1 million dedicated to moving all of Illinois’s 12 public four-year institutions to the Common App is paying for both state and university administrative costs associated with the effort, the llinois Board of Higher Education told EdScoop.

The initiative, which Gov. JB Pritzer’s office announced earlier this month, pays for implementing the Common App and annual membership fees, as well as the fees charged by the platform to process each application. The money will also go to covering ongoing state expenses for oversight and data collection, as well as state administrative staff costs. All but one of the state’s four-year schools have now joined the platform, designed to streamline the college application process by offering a single portal to apply to more than 900 universities and colleges. (Northeastern Illinois is expected to launch this January after updating its systems.)

Three Illinois state universities already offered applications through the Common App: University of Illinois, Chicago, Chicago State University and Northern Illinois University. By offering all public four-year institutions on the widely-used online platform, the state aims to ease the application process for Illinois students and to draw in out-of-state students to Illinois colleges, according to an announcement from Pritzker’s office.

Illinois colleges on the platform are in a searchable database, where potential applicants can sort through hundreds of colleges to find the ones that fit their needs. The Common App also offers a central digital application, intended to make it simpler to submit to multiple schools. lllinois is the first state to lead an initiative to offer applications for all public four-year universities on the platform, according to the Common App website.

If project money is left over, the state intends to pay for colleges to use Common App analytics tools. Colleges, as part of the initiative, will also share some application and graduation data with the state board. Students are not charged for registering for the Common App, but could need to pay fees when applying through the platform. Users can apply for waivers from the fees, based on income. 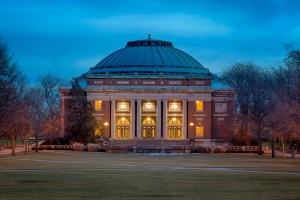 Illinois pays for its public universities to join Common App