Purdue University astronomy students are exploring the cosmos from the comfort of their dorm rooms, even amid coronavirus-related quarantines, thanks to virtual reality technology being tested by assistant professor Danny Milisavljevic and the school’s simulation testing center.

Over the last year, Milisavljevic — an astrophysicist at Purdue University who was formerly a postdoctoral fellow at Harvard University — has taught the study of exploding stars with the aid of virtual reality. Exploding stars leave trails of fragments and other clues around them, much like the debris patterns of explosives. But rather than looking at photos or through a telescope, students in his class can walk around a virtual classroom and examine 3D models of supernovas from every direction by strapping on a VR headset. Milisavljevic said his students act like an astronomy-focused “bomb squad,” reviewing how different stars exploded and citing their previous astronomical classifications.

“It’s one thing to look at it from a direction, but when you change your head from side to side, it gives you the perspective you need,” Milisavljevic told EdScoop.

The best part, he said, is that thanks to a National Science Foundation RAPID grant and the easy portability of VR headsets, Purdue students can participate from anywhere in the world that has a Wi-Fi connection.

Milisavljevic originally began working with the school’s simulation research center, called the Envision Center, to study a better method of visualizing his work. At Harvard, he said he used web applications and movie production software to create 3D models of exploded stars, but technology limitations at the time forced him to share the majority of his work in 2D mediums, like video. By the time he arrived at Purdue U. in 2017, though, virtual reality technology had progressed enough to showcase his work.

“[Virtual Reality] was very goofy and I remember all these people talking about getting sick when they put a headset on,” he said of the technology’s early days. “But I started experimenting with the technology to visualize and provide an immersive virtual environment to explore the data sets I was creating.”

The 3D models and the VR simulations were a perfect match, and Milisavljevic quickly realized there are two primary benefits of examining the models using virtual reality. One is the ability to study them with another researcher or student in the same room, who was also wearing a headset. The second is that a VR environment can host multiple models on the same program. Because students can walk back and forth between models, he said, it prompted more insightful questions and a more effective understanding of the complex detective work he was asking his students to perform.

“It drove innovation in the analysis of the data and the presentation of it,” Milisavljevic said.

When the COVID-19 pandemic hit, Milisavljevic said he realized that students would no longer be able to share their observations of the universe while physically standing in the same classroom. The university’s RAPID Grant, usually distributed by the National Science Foundation for immediate research needs, like COVID-19 vaccination and testing studies, was awarded to Milisavljevic for his work researching the wireless connectivity component of virtual reality, especially for academic purposes.

Though all Milisavljevic’s students were on-campus throughout the year, he said the idea of his research is to facilitate remote-learning through the headsets so they can be used if at any point students need to go home for the semester, or if professors and researchers from other parts of the world want to collaborate.

A trend of VR-based remote learning is growing elsewhere, as well: Temple University recently announced it would continue its VR-based curriculum for online MBA students.

“We put on this headset, or even on a PC or Mac, and now we can all be in the same virtual environment,” Milisavljevic said. “The instructors and students have great control over what we’re seeing, and we can collaborate to understand the stellar dynamics happening in distant galaxies and nebulae.” 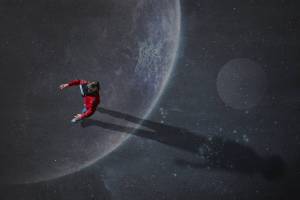 Purdue students are using VR to explore the cosmos, remotely