By teaching young girls to code, the false notion that girls and women don’t belong in the technology industry can be broken down and they can be rewired to be confident in taking on the world’s problems. This was the message of Reshma Saujani, founder of Girls Who Code, a nonprofit organization dedicated to increasing the number of women in computer science, at an edtech conference this week.

“I am on a mission, not only to teach girls to code, but to teach women to be brave and to unlearn perfectionism,” Saujani told attendees of the annual Educause conference in Chicago on Thursday.

From a young age, girls and boys are taught differently, Saujani said. Boys are taught to be brave, but girls are protected and raised with the belief that boys are better suited for certain tasks and careers, she said, teaching them this notion of “perfection or bust.” As a result, if a young girl doesn’t succeed at something or is lead to believe that she can’t succeed, she won’t try.

“There are a lot of things in our culture that turn girls off to certain things, that push them away,” Saujani said. “So the first thing that we have to think about is, how do we change culture?”

Girls Who Code is on a mission to close the gender gap in technology and to change the image of what a programmer looks like. Over that last 30 years, the gender gap in technology has gotten worse despite the rapid growth of computer science job opportunities, according to a joint study from Girls Who Code and professional services company, Accenture. In 1984, 37 percent of computer science majors were women, but by 2014 that number has dropped to 18 percent.

To date, Girls Who Code has taught more that 185,000 girls how to code — 50 percent of which come from historically underrepresented groups, like the black, Latina and low-income communities. The organization also has more than 10,000 clubs across the country training girls how to become programmers.

Saujani said she often asks young girls what computer scientists look like. “They say the same thing,” she said. “It’s a dude. He’s wearing a hoodie. He’s sitting in a basement somewhere. He’s drinking a Red Bull and he hasn’t showered.”

The stereotype of who can be a computer scientist doesn’t include women, Saujani explained. “This cultural image of what a programmer looks like combined with the fact that we have no role models or narratives of girls that are in technology has turned generations of girls off [of technology],” she said.

“It’s our turn now, as the adults in the room, to think about what we an do to make sure that every single girl who wants to learn how to code, can,” Saujani said. “We are so lucky that in our life we have the opportunity to solve this problem and it matters, because when we have more girls and girls who want to be change-makers, who want to change, when we have them solving today’s problems, it’s going to be a better place. It’s gonna be a better world.” 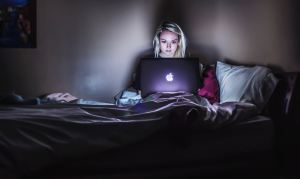