The Vermont Agency of Education has failed to report school-level testing results within the typical timeframe due to an issue with the statewide data collection system, according to a department official.

Results of Vermont’s standardized testing for K-12 English and mathematics were expected to be ready in fall 2018. Although state-level data was published in October 2018, school-by-school results have yet to be made public. The two data sets have been published simultaneously in previous years.

Michael Hock, director of Educational Assessment at the Vermont Agency of Education, told EdScoop that the deadline for the official public release of the data has been pushed back indefinitely. “We are eager it get [the data] out, but right now we’re just not able to do it,” Hock said. The agency had been given a deadline extension to December 2018.

The reason for the delay, he said, is largely due to an issue with the state’s new Statewide Longitudinal Data System. It has created a bit of a domino effect of delays, Hock said.

Once the SLDS is up and running, Hock said, the data reports will likely become available within a few weeks. “Our data folks are all ready to go here,” he said.

Funded through a $4.9 million grant from the Department of Education in 2012, the SLDS supports Vermont’s automated data reporting project and, according to its website description, is intended to enhance how the state manages, analyzes, and uses education data. SLDS is hoped to help education professionals make efficient, accurate and data-informed decisions to improve student learning and success. The Longitudinal Data System, Hock said, will provide Vermont’s education agency daily updates on education data.

However, with the digital data collection system out of commission, Vermont’s education leaders are missing key data to assess the performance of the state’s education system — school-level testing data is needed to match students, scores and schools together. Additionally, without an official report on school-level testing results, the state is unable to provide the Department of Education with mandated education census data.

Under the Every Student Succeeds Act, signed by President Obama in 2015, all states are required to provide the Department of Education with annual statewide assessments to inform educators, families, students, and communities of students’ performance.

Although the data has not yet been disaggregated, Hock said that schools are still able to pull together some school-level data, though it’s currently considered unofficial. Students and their parents also have access to personal scores, which went out over the summer, Hock said. 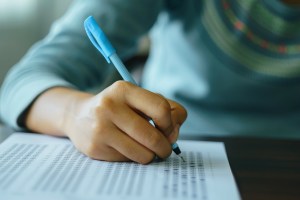