Enrollment at virtual and blended learning schools keeps rising — but scores remain consistently and abysmally low, according to a recent report.

About 260,000 students in 33 states were enrolled in nearly 450 full-time virtual schools during the 2013-14 school year, according to the analysis, from the National Education Policy Center. Another 26,000 students were educated in 87 blended schools, which provide a combination of online and face-to-face instruction.

But the rising numbers in enrollment didn’t reflect performance measures when comparing the virtual and blended models with their brick-and-mortar counterparts — virtual schools had a 40 percent graduation rate and blended schools had a 37 percent rate in the 2014-15 school year, compared with 80 percent nationwide.

“The rapid expansion of virtual schools and blended schools is remarkable given the consistently negative findings regarding student and school performance,” researchers wrote.

The authors, Gary Miron, a professor at Western Michigan University, and Charisse Gulosino, an assistant professor at the University of Memphis, also recommended that state policymakers work out the kinks in their virtual and blended schools before adding more.

“States should place their first priority
on understanding why virtual schools and blended schools perform weakly
under a college- and career-ready accountability system and how their performance
can be improved before undertaking any measures to expand these relatively new
models of schooling,” they wrote.

Only 18 percent of the virtual schools had above-average proficiency rates in English and math, while 82 percent had proficiency rates below the state average, according to the report. For many schools, performance benchmarks like adequate yearly progress were not available.

The report tallied statistics from district- and charter-run virtual and blended schools. Rocketship Education, which is opening a charter school in Washington in the fall, had the most blended learning schools (a total of 11 during the 2014-15 school year), according to the report.

Many previous reports were focused on cyber charter schools, and red flags have been raised about for-profit groups like K12 Inc., which runs schools amid questionable practices in several states, including Ohio and California. 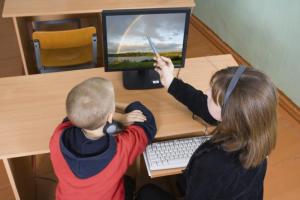