Hard copy degrees still hold value, but to be confident and stay relevant in the evolving workforce, students and hiring managers are giving more worth to digital credentials, according to survey results published Monday by educational software firm Ellucian.

“There is going to be a significant shift in the value of a credential, especially as a post-degree credential,” Katie Lynch-Holmes, Ellucian’s director of global enablement, told EdScoop.

The survey, which queried 500 students aged 18-45 currently enrolled in college or a credential program and 500 recruiters and hiring managers, found that the majority of college students feel unprepared for the workforce despite their formal educations. This lack of confidence was shown to be intensified in Generation Z students, just 36 percent of whom say they feel prepared compared to 49 percent of millennials.

Lynch-Holmes said she was not surprised by students’ lack of confidence. There has long been an expectation that a college degree is a golden ticket into the workforce, she said, but added, “That is not the reality.”

But although students generally feel unprepared to enter the workforce, 62 percent of recruiters who responded to the survey said they are confident that candidates have the skills to succeed.

A valuable way for students to supplement their formal educations, Lynch-Holmes said, is to earn credentials. As a low-cost, time-efficient educational program, credentials are quickly emerging as an essential resource to stay relevant and competitive in the workforce. “The credential on top of [a degree] is a good way to differentiate,” Lynch-Holmes said.

Ninety-seven percent of recruiters said they believe post-degree credentials make candidates more specialized in their fields, according to the survey, and thirty-nine percent said they think further education is needed more than once a year to stay relevant in the workplace.

“The big crux is how are we going to display that there is value associated,” Lynch-Holmes said.

The report suggests blockchain as one possible technical solution, stating, “The emergence of blockchain technology in higher ed allows for easier verification and eliminates credential tampering.”

As the modern workforce continues to evolve and recruiters look for new skills in their job candidates, traditional degrees are no longer the only means to acquire and continue education, according to Ellucian.

Credentials are able to address the needs of both students and the workforce as the idea of becoming a lifelong learner is increasingly important to succeed in today’s workforce.

As for the confidence of younger generations in their workforce preparedness, Lynch-Holmes said she is hopeful they will be better off.

“I think that they are actually part of the reason that the system is changing,” she said. 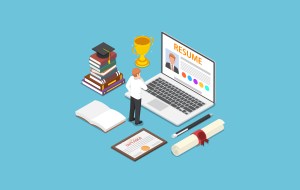