No one wants to pay $200 for a textbook, and soon no one will have to, because the $200 textbook may be disappearing.

Like other technological trends that were plodding along before COVID-19, the use of digital resources and freely licensed learning materials — known as open educational resources, or OER — exploded in 2020. And that growth comes with an added bonus for students: For the first time in decades, textbook prices are dropping.

According to Mark Perry, an economics professor at the University of Michigan-Flint, OER can be credited with the downturn. A widely circulated 2019 chart designed by Perry showed that while the cost consumer goods like TVs and toys has dropped over the past two decades, lines on the graph for essential goods and services — including food, housing, medical care, child care, education and textbooks — have continued to arch upward.

But recently, the textbook line has started sagging, which Perry attributes to an “open textbook effect” that’s taken off during the pandemic. The trend can be seen in the subscription rates of OER publishers like Rice University’s OpenStax, which saw a doubling during the health crisis in the number of students using its materials to 4 million. The nonprofit publisher is branching out beyond books, too, with a new courseware platform enjoying 300% annual growth.

“One of the things we did to respond to COVID was we made that even more easy,” Williamson said. “We created all of those LMS cartridges so that faculty could easily pull that content into their learning management system and implement it quickly.”

Last fall, OpenStax announced it would build on its recent success and double the number of textbooks it offers to more than 80. Several of its titles already occupy top slots in the marketplace, including books on physics, chemistry, astronomy, anatomy and sociology, each of which claim hundreds of thousands of student users. And traditional publishers want in, with several leading publishers now stamping their logos on OpenStax’s license-free materials.

“In the early days, they laughed at us and said good luck competing,” Williamson said. “Now, OpenStax, a lot of our textbooks have very large market share percentages. They see us more as a competitor, but also an opportunity to rethink their strategy.”

Historically, university students have been required by their instructors to spend hundreds of dollars per semester on textbooks, only to sell them back at the end of term for a fraction of what they paid.

“I think if education is honest with itself, there was a little bit of taking advantage of students that occurred there. It became a bit of a racket,” said Ryan Lufkin, a marketing director for the learning management system Canvas. “That model is not sustainable, especially given the college student debt crisis. I think it needs to be addressed and you’ll see more and more colleges adopting those open resources because frankly that’s more what higher education is. There’s always been a certain democratization of higher education and that really is the right path.”

But if the traditional textbook market was grifting students, it wasn’t great for publishers either. They don’t get a taste of textbook resales, which prompted them to constantly release new versions of their books, even in academic fields — like basic mathematics — where new developments are seldom made.

“There’s always been a cohort of instructors that would prefer to use their own content or their peers’ course materials,” said Kent Peterson, McGraw-Hill’s chief marketing officer for higher education. “So over the years, we have both competed and collaborated with OER.”

Peterson said OER contains a different value proposition for instructors than what publishers like his offer. When McGraw-Hill has worked with OER publishers like OpenStax, he said, it was because faculty said they wanted McGraw-Hill’s feature-rich platform, but liked the OER content.

“We have been investing in digital course materials and digital transformation for many years. It’s been a key part of our strategy for at least 15 years,” Peterson said. “And as we’ve gone through this process, you have to keep an eye on technology, but you also have to stay very in sync with the high ed instructors and institutions in terms of what their interest and ability to bring digital into the classroom has been. We’ve introduced technologies we believe can provide a richer learning experience but doing it in such a way that we don’t get too far out ahead of the folks we’re creating it for.”

The pandemic was both “a vindication” and an accelerant of that digital transformation work across the industry, Peterson said, and though digital sales dominate today, it was only four years ago when digital overtook McGraw-Hill’s physical book sales. And for professors who’ve honed classroom lessons over decades, ditching their trusty textbooks for a free or paid digital solution can still be a tough sell.

But according to research published this year by Bay View Analytics, an educational research firm, OER continues to gain favor and recognition among college faculties. And just as publishers look to faculty to understand market demand, professors look to their students, and many said cost was their chief motivation for adopting OER.

“For most of my students, the most significant factor in what kind of textbook they buy (or if they buy one at all) is expense,” one professor told researchers. “Most of my students come from backgrounds of modest to average economic means, so expense is a real concern. Because I believe that reading the textbook is vital to student success, I will choose the cheapest option even if I don’t think it’s the best one. If I could find open access material of good quality that was available in a discrete, downloadable format, I would be very interested in using it.”

OpenStax claims the adoption of materials on its platform alone has since 2012 generated $1.2 billion in savings. Traditional publishers have started bringing down their cover prices to compete with cheaper offerings, like those from OpenStax and the courseware provider Lumen Learning, as well as digital textbook companies like BibliU, which claims 140 institutional customers globally. Dave Sherwood, who dropped out of Oxford in 2015 to make BibliU his full-time job, said his business was growing fast even before the pandemic.

“A lot of conservative institutions now are thinking that digital is a core part of what they need to be offering for content, as opposed to like, ‘Students can find their own from friends or Amazon or the bookstore,’” Sherwood said. “I think the perception of that has changed.”

Sherwood said he started his company to increase access to educational materials, especially for students who truly can’t afford them. The company is currently running pilot programs with some schools, including Occidental College in Los Angeles and Santa Fe Community College in New Mexico, to help the poorest students get free digital textbooks. But for other students, what is the right price for a textbook?

“If you ask the students and faculty, they’ll say free. And if you ask the publishers, they’ll say $40, $50,” Sherwood said. “I think the acceptable, affordable price is somewhere in between. And when OER is packaged and scaled, it often comes out to about $20, $25 per student, per class, and I think that’s a price point at which equilibrium is met.”

Right tool for the job

It’s not enough to tell teachers there’s free content online and to go use it, said Kelli Campbell, president of Discovery Education, a digital educational resources company that focuses on K-12. Campbell led the creation of Discovery Education’s “Techbook” business and served on the federal committee that developed President Barack Obama’s “digital textbook playbook.” One thing that’s remained constant over the years, she said, is that teachers don’t have much time.

“Teachers are asked to develop their lessons and to be a counselor in the classroom and to understand the latest [public health] rules that they need to be applying,” Campbell said. “The internet is full of amazing pieces of content, but the time it would take to curate that and align to the needs of your classroom and your individual students is probably cumbersome.”

Publishers live and die by their ability to curate content and understand what instructors need. Fernando Bleichmar, the general manager and executive vice president of U.S. higher education at Cengage, told EdScoop that digital content is helping companies like his adapt to emerging market trends, like shorter certificate programs and online degrees tailored for adult learners. Traditional textbooks, which are published with a single audience in mind — full-time college students — can be overkill for those attending a four-week course.

The average college student looks different today, too, with many balancing educations with careers and families. During the pandemic, higher education has proved itself to be a luxury many can’t afford.

“People are really making decisions between can I afford my materials and can I eat?” Bleichmar said. “So you have to make it affordable.”

The focus at Cengage is not only on providing learning materials, he said, but offering services that answer critical questions for administrators and faculty, like which students are succeeding, which aren’t and why.

And whatever the price point, digital platforms can enable learning opportunities that physical textbooks can’t. Whether the goal is to become a fluent French speaker or a Python programmer, passive learning from static content is not the most efficient way to pipe that knowledge into a brain. Cultivating true expertise requires interactivity, Bleichmar said.

“If you just want to read something, I think print book versus ebook is a preference,” he said. “But if you want to learn something, then the best models end up being a mix.”

This piece is part of StateScoop & EdScoop’s Special Report on Digital Services. 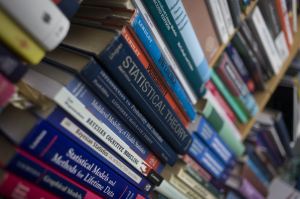