An online database that details state policy and practices for digital learning in K-12 schools has been updated and expanded to help school leaders better see and understand which states are leading in innovation and digital instruction.

The database also allows users to create filters for policies, resources, procurement and funding; view state-by-state comparisons; and explore quick facts, like the number of schools and students in each state.

Two education leaders spoke about some of those changes, and about the state of digital instructional materials in their regions, during a webinar this week hosted by SETDA executive director Tracy Weeks.

Diana McGhee, director of technology and information at Fort Thomas Independent School District in northern Kentucky, described her district’s efforts to eliminate the digital divide among its students, to leverage technology for educational gains and to make the most effective use of available resources.

As Fort Thomas Independent schools began its digital conversion, McGhee said staff members were careful not to make any abrupt changes. They maintain a blended learning environment — most instructional materials have gone digital, but still others remain in print.

McGhee estimated that grades 6 to 12 are about 70 or 80 percent digital and 20 or 30 percent paper. The younger grades are moving to digital at a slower pace.

“Digital conversion is a process,” McGhee said in the webinar, speaking to teachers, librarians, curriculum specialists and workers in both the public and private sector. “Every day is a learning day. We do face bumps along the road.”

At North Carolina’s Department of Public Instruction, Donna Murray is involved in helping over 2,500 schools and almost 1.5 million K-12 students make the shift to digital content.

She spoke about popular learning management systems in the state and how more than half of North Carolina districts report using open educational resources.

North Carolina has many state partners, including libraries, parks, museum and state organizations. “We’ve been working with them to align [our] resources to state standards,” Murray said. “We’re really excited about this partnership and out state partners seem equally excited.”

To see how your state stacks up, view the interactive database here. 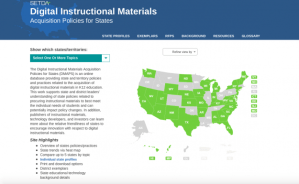