Microsoft on Tuesday announced it is rolling out a small, sleek device that it believes will make an especially good fit for the education market.

The Surface Go is Microsoft’s most portable and affordable Surface product to date. At just 1.15 pounds, 10 inches long and 8.3 mm thick, the device is made to fit comfortably in a student’s backpack and resemble the size and weight of a standard composition notebook.

It also “represents a new entry point for the Surface family” — with prices starting at $399 — “while keeping the premium qualities that have come to define it,” Panos Panay, Microsoft’s chief product officer, wrote in a blog post announcing the Go.

The Surface Go also has an improved battery life — a feature developed in response to repeated requests from educators and their students, officials told EdScoop at a briefing during the ISTE conference in June. If the Go is running on all-day video playback, its battery can last up to nine hours, they said.

With the accompanying Surface Pen ($99) and attachable keyboard called the Surface Go Type Cover ($99-129), the price begins to creep up. However, Microsoft officials said a compatible pen is available at a lower price from at least 13 other manufacturers. 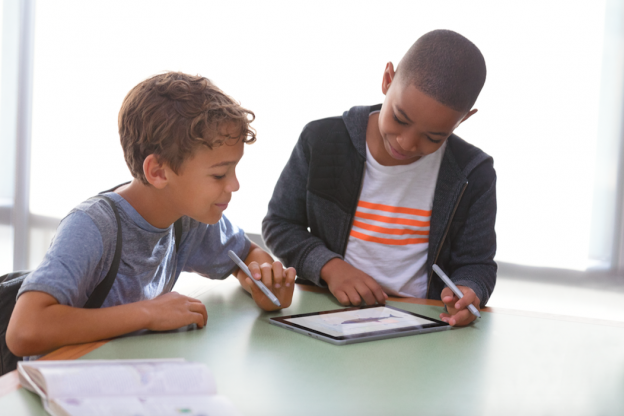 Additional features on the Surface Go are unlocked with the stylus pen and attachable keyboard. (Microsoft)

The Go, combining the full functions of a laptop with the convenience of a tablet, offers all of the immersive reader tools of the full Windows 10, connects to digital microscopes and cameras, and opens easily to augmented reality apps as well as Minecraft: Education Edition.

In the education market, officials think it will best serve students from grades 3-6, though it’s appropriate for all ages.

“In portrait mode, the screen was designed to render the page to the scale of most school textbooks, and in landscape mode, it can render pages side by side as if you were holding a paperback book in hand,” Panay wrote. “At the approximate size of a composition notebook, writing on the screen feels natural and intuitive.”

In an interview with the publication Wired, Panay said he did not create the Go to compete with Google’s Chromebook, which comprises about half of the devices in the U.S. education market.

Wired also reported that school IT administrators will have the option to choose between two Surface Gos: one with Windows 10 Pro Education and the other with Windows 10 S mode-enabled.

The Surface Go with Wi-Fi is available for pre-order now and will be released on Aug. 2. An LTE-equipped version will become available later this year.

by Betsy Foresman • 3 weeks ago
The essential higher ed and K-12 information technology news, delivered straight to your inbox.
SIGN UP FOR OUR WEEKLY NEWSLETTER.
Privacy Policy
We use cookies to provide you with the best experience across all Scoop News Group websites. By using Scoop News Group websites, you consent to the use of cookies. Learn more