In an effort to modernize a vital source of support for internet connectivity, the Federal Communications Commission announced several updates to its E-Rate program last week aimed at small and rural schools. However, education leaders said the changes don’t do enough to prepare schools for technology’s future.

The FCC also raised the minimum Category 2 subsidy from $9,200 to $25,000 per five-year funding cycle, a change that the educators expect will help schools with low student counts unable to rely on per-student funding scales.

Educators and technology leaders first weighed in on these proposed updates in July 2019, urging the FCC to include cybersecurity funding under E-Rate. They also asked the FCC to administer funding at the district level, rather than the school level, cutting back on paperwork, which was ultimately approved in the recent updates.

According to Keith Krueger, CEO of the education advocacy group the Consortium for School Networking, “They fixed the things that the education community asked them to.”

However, several requests made by education stakeholders were not taken up by the commission.

“What they haven’t done is look forward to address new problems that are developing, like cybersecurity,” Krueger told EdScoop.

The cybersecurity risks school systems are facing are increasing rapidly as data breaches and cyberattacks become more frequent. Louisiana Gov. John Bel Edwards declared a state of emergency in July after the state’s school systems suffered a series of ransomware attacks that disabled computer systems. But this is not an isolated incident. In 2019, cyberattacks also hit schools in Connecticut, Illinois and New Mexico.

But the solutions to mitigate cyber risk are expensive for school districts to implement. According to the Cybersecurity Cost Report, schools with more than 50,000 students report spending between $100,000 and $150,000 each year on cybersecurity services and equipment.

Schools are going to have to find the money to build and strengthen their cybersecurity infrastructure elsewhere, Krueger said.

“The interesting thing is that the federal government provides a huge amount of funding to state governments and even universities for cybersecurity but it hasn’t been allowed at the school level,” he said.

Although the list of services that E-Rate can cover wasn’t expanded to include cybersecurity during this round of changes, Krueger said the commission has given some indication that they are willing to consider it in the future.

According to a statement attached to the recent updates written by FCC Commissioner Michael O’Riley, the possibility of making cybersecurity services eligible for E-Rate stipends is not off the table.

“Without proper diligence, these systems could be extremely vulnerable to mischief, causing extensive harm to users and others while wasting our investments in the process,” O’Riley wrote.

Overall, Krueger and Leichty said that they are mostly satisfied with the changes that were made to E-Rate. Although several requested changes made by the education community weren’t included in the FCC’s update to the program, “they didn’t do anything bad,” Krueger said. 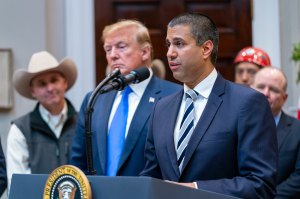